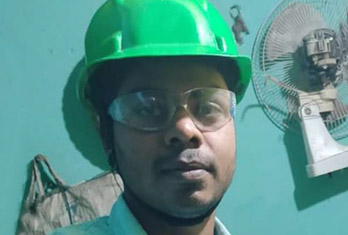 Chitranjan Jena : from a Job seeker to a job provider

Sithaloi is a small village in Jajpur Block of District Cuttack in Odisha. Chitranjan Jena lived there with his father and mother. His father was a farmer by profession and that was the prime source of the income of his family. However, the income from a small landholding of 1.5 acres wasn’t good enough for the family to make the ends meet.

Poverty forced Chitranjan to drop out after completing his high school. Even as he started to assist his father in farming, that did not lead to an increase in the family’s income per se. And that often frustrated Chitranjan!

As the luck would have it, while Chitranjan was going through these hardships of life and was facing dejection, he visited DBF’s skill training Centre, DIKSHa, at Jajpur. DBF is operating this Centre in collaboration with Odisha Government. Realizing that the Centre offered a short term course in training youth like him as a Domestic Electrician, he decided to enroll himself in that course.

Led by his passion and dedication, Chitranjan completed the course successfully. He was then picked up by a Hyderabad based enterprise, Renewsys India Private Limited at a decent salary. Chitranjan, however, had a different dream. He aspired to be an entrepreneur himself. Aliening with his ambition, soon he had setup a small firm of his own in Jajpur.

His hard work and skills ensured that he was occupied well and earned satisfactorily. Soon he started to get reasonably large work orders, which required him to have more talent to support him. As we document this case to celebrate his success, he employees 3 talents and pays them an average wages of Rs. 9000/- each month. With his own earnings close to Rs 2 Lakh annually, he wishes to fulfill every wish of his parents now!